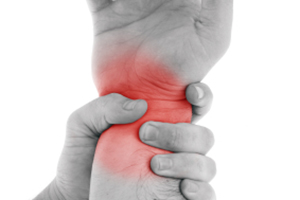 Carpal tunnel syndrome (CTS) is a painful condition affecting the hands that is particularly common in the workplace. The prevalence of CTS is approximately 6-12% in the general population, but it accounts for nearly 50% of all work-related injuries. CTS is the result of a pinched nerve in the wrist, and patients who develop it usually experience numbness, tingling and weakness in their affected hand. Treatment for CTS can be either surgical or non-surgical (conservative) depending on the patient's condition. Conservative treatment is typically recommended at first, but if symptoms are severe or the patient fails to improve after attempting this treatment, surgery may be recommended. Physical therapy is commonly used to treat patients with CTS and often consists of a number of different interventions, including manual therapy, in which the therapist performs various mobilizations and manipulations with their hands. Studies comparing the benefits of surgery and physical therapy have produced mixed results, and it's not completely clear which is the better choice for patients. Therefore, a powerful study called a randomized-controlled trial was conducted to determine whether manual therapy or surgery was more effective for treating patients with CTS.

140 patients randomly assigned to one of two groups

Individuals diagnosed with CTS were invited to participate in the study and screened to determine if they were eligible. Of the 140 patients screened, 94 fit the necessary criteria and were randomly assigned to one of two groups: the manual therapy group or the surgery group. Patients in the manual therapy group received one 30-minute treatment session per week over three weeks, for three sessions total. These treatment sessions consisted of various manual therapies that targeted the elbow, forearm, wrist, fingers and shoulder, as well as the neck, which is commonly impaired in patients with CTS. At the final session, patients were educated on how to perform the exercises at home and told to perform them if their symptoms got worse. Participants in the surgery group underwent surgery based on a decision made between them and the surgeon, and then received the same educational session on exercises as the manual therapy group after the procedure. All patients were evaluated before the treatments and then again one, three, six and 12 months later for a number of different outcomes, including overall symptoms and function.

Manual therapy leads to greater improvements at first, but results are similar in long term

Results showed that after one month, patients in the manual therapy group experienced significantly greater improvements in function, the seriousness of their symptoms and pinch grip strength than those in the surgery group. After six and 12 months, the two groups reported similar scores in most outcomes measured. Nonetheless, these findings are supportive of manual therapy, since they suggest that patients can expect to have better short-term outcomes with manual therapy compared to surgery. This can be particularly important for office workers, who will be able to return to work and perform their necessary duties quicker after undergoing manual therapy. It's also important to point out that manual therapy is significantly less expensive and comes with far fewer risks than surgery, which makes it the more attractive option of the two considering both led to very similar results. For these reasons, patients with CTS should continue to try physical therapy—especially manual therapy—as the first line of treatment for their condition before considering surgery, since it leads to superior short-term and similar long-term outcomes.

-As reported in the March '17 issue of JOSPT