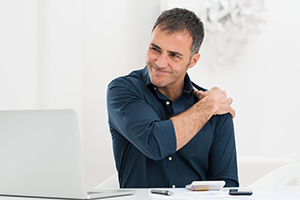 Evidence to support the use of these treatments is mixed

Shoulder pain is quite common, with one-third of adults experiencing it every year. It ranks fourth behind low back, knee, and neck pain in terms of the most prevalent painful conditions encountered. In many cases, patients with shoulder pain are given a variety of passive physical treatments. Passive treatments don't require the active participation of patients, and some examples include thermal therapy (heat or cold), ultrasound, laser therapy, and shock-wave therapy. Despite the fact that these types of treatments are used regularly, evidence to support their effectiveness is mixed, and some medical professionals don't recommend their use. To better determine if passive physical treatments should be used for shoulder pain, a powerful study called a systematic review was performed on all available literature on the topic.

Five medical databases were searched for relevant studies that evaluated passive physical treatments for shoulder pain. Out of 1,470 articles that were identified, 21 were considered eligible to be reviewed, and 11 of these were found to have a low risk of bias, meaning the quality of their data was high. These studies covered the following passive physical treatments: laser therapy, shock-wave therapy, heat therapy and ultrasound.

Effectiveness of passive physical treatments is called into question

-As reported in the March '15 issue of Physical Therapy